When I was small pretty much the only thing I did was make things. I was pretty much obsessed with LEGO (I still am) but the greatest present I ever received was this Commodore Vic-20. It was an amazing little computer that I could plug into my TV to program and play games. It had 5K RAM. The operating system took 1.5K of that, leaving me just 3.5K to play with. Naturally had to save £20 for the 16K expansion pack, but I was so excited when I got this for my birthday because it allowed me to write longer programs, and play some pretty cool games like Hunchback and Pirates Cove. 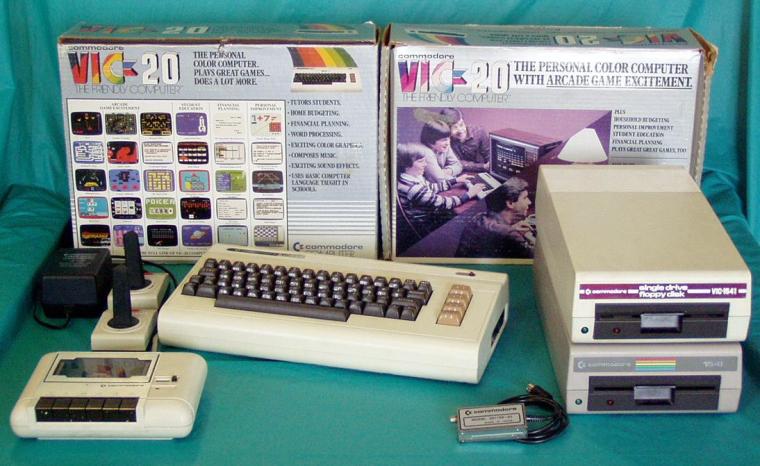 The single 5.25″ floppy drive that you can see here had a whopping 180K! That was more memory than I would ever need. It was around this time that Bill Gates allegedly said, “640K should be enough memory for anyone“. Think about that in today’s world. I bought a hard drive for a present recently. 500 GB. £40. That’s equivalent to over 100 million Vic-20’s!

To put this into context, your twitter profile photo is probably about 50K. My entire PC set-up had less than one-third of that. But it kept me happy for hours. I bought Personal Computer magazines and copied the programs in the back pages, creating my own games, data bases and quizzes in VisualBASIC (the operating system that Microsoft was built on).

I wasn’t the smartest kid, but I was curious and determined enough to code, because I loved that feeling of typing “RUN”, and then hoping that something magical would happen on the screen.

Today, cloud based technology and WYSIWYG drag-and-drop software allows us to build beautiful apps or websites very quickly, so we have more opportunities than ever before to create things and make something wonderful.

Everyone should learn to code.

In America alone, there is an estimated short-fall of 1m jobs that require decent levels of computer science literacy. An estimated 1.5m jobs with just over 500,000 students projected to have the required skill set. It’s a problem. But I don’t think it’s the BIGGEST problem…

Learning to write HTML, Java, R, Python (or whatever your programming language of choice may be) would be time very well spent (no matter what your age is), but people shouldn’t learn to code just because there is a shortage of programmers, they should learn to code because once you know how to make something, it changes how you see things.

I learned type-setting as my first job in my dad’s printing company when I was 15, and once I learned how to set type and understand the different fonts and spacing, typography looks different. You appreciate words more. Once you know how to assemble an electronic device, every computer seems a bit less mysterious. Once you know how to give a speech, you start to appreciate more the speeches that you see other people give.

Learning how to make things turns you from a spectator into a participant, from someone at the mercy of the system, to someone who is helping run and support the system.

Learning how to make things gives you the guts to make more, to fail more often, and to get better at making. I enjoy writing blog posts and sharing thoughts and ideas because I feel like I am making something.

The challenge that we have today is that everyone is so busy connecting with each other, that they have stopped creating as many things. People play more. But they don’t create more.

I love the iPad and everything that highly portable devices have done to change the way that we run our lives, but think about how you consume things on an iPad. You sit back in your chair with your latte, and you read your tablet like you would a book. Now think about a computer. You sit in a different position. You are upright. You often have more intent because of consuming content from somewhere, you are more likely to be creating content of some form. It could be something as wonderful as a piece of art, or as plain as an email. It could be a meet-up or a livestream of you talking about something that you’re passionate about.

Technology is enabling more creativity than ever before.

Of course we can turn iPads (iPad Pro?) and Surface tablets into fully functioning computers, but it is often the way that we use a “computer” that determines our outcome.

I’m all for consuming information and challenging yourself to be more informed, but we still need to find time for creativity. In whatever form that takes for you. It’s cathartic. Reduces stress. Opens your mind. Who knows what you could create that might help and inspire others?

In our spectator fueled economy, it seems like there are not enough people who make things, and too many people who just watch things.

Got kids (especially if they’re girls) watch this >>

Like creating tactile things rather than digital things? You’ll LOVE this TED talk >>