I have a confession.

For some reason (especially in the UK), this is not cool to admit. I’ve been to his seminars and read his books. I feel like it’s a confession, because talk of anything “self help” related in this country seem to be shortly followed with an eye-roll or a slightly condescending nod. For a nation that needs a LOT of help, I’m not sure why this is, although that is a whole different conversation for another time. We’re not a very optimistic or encouraging country.

When people fail, Brits are quicker to say “I knew that wouldn’t work“, than “Get up and try again, you can do it”. Despite all of America’s faults, and there are many, it is generally a more optimistic and hopeful country. Some of that optimism may be misplaced (especially in politics) but nevertheless, I’d take optimism over pessimism any day.

Anyway…  I’m 43, I’m a dad, I’m not “cool” and despite my years working in Shoreditch, none of those hipster genes rubbed off on me. I prefer a brasserie with a good bourbon selection, to a dive bar with craft beers. I can’t grow a beard. My jeans fit me. I wear Jeffrey West’s not Vans. I love cycling but I ride a racing bike not a fixie. I still use email and have never logged into Slack. I prefer the corporate world to startups (despite all the politics and processes). There are many great things you can debate with bearded cube-dwellers around the espresso bars of East London. Self-improvement ideas are not one of them.

I only share this because I spend a lot of time talking about technology, and I am often around young people starting out on their career, each of them a keen to fit in. Sometimes too keen. I see geeks like me who may be slightly awkward around the cool kids, trying to dress and act differently, in order to be accepted by their peers. It’s understandable, everyone wants to be liked (socially and professionally), but in technology especially, there are a LOT of cliques. And there’s a lot of language that new kids don’t understand. To an outsider, spend sometime in any bar around Silicon Roundabout or Silicon Valley and you’d be forgiven for thinking everyone was speaking a separate language.

“We all want to fit in, but the people we admire the most are usually the ones who stand out”.

All that being said, I thought I’d make a note about this because a few of the things that have inspired me the most over the last few weeks, are all things which someone rolled an eye or took a deep pitiful sigh when I mentioned it…

1. I watched the new Tony Robbins documentary on Netflix.

I thought it was outstanding. (If you can get past some of the cheesier parts, there’s some life changing stuff in that little film. 2 hours very well spent).

I don’t know why talk of daily routines gets a bad rep, but I can’t live without a routine. When I follow one, good stuff generally happens each day. When don’t, I wake up a few days later wondering where I wasted my time for the last few days, and I try to get back on track. I spoke to a few people about it and it is apparently not cool to have a daily routine. Meditation? Prayer? Visualisation? Affirmations? All not cool to talk about. Step aside and move on. 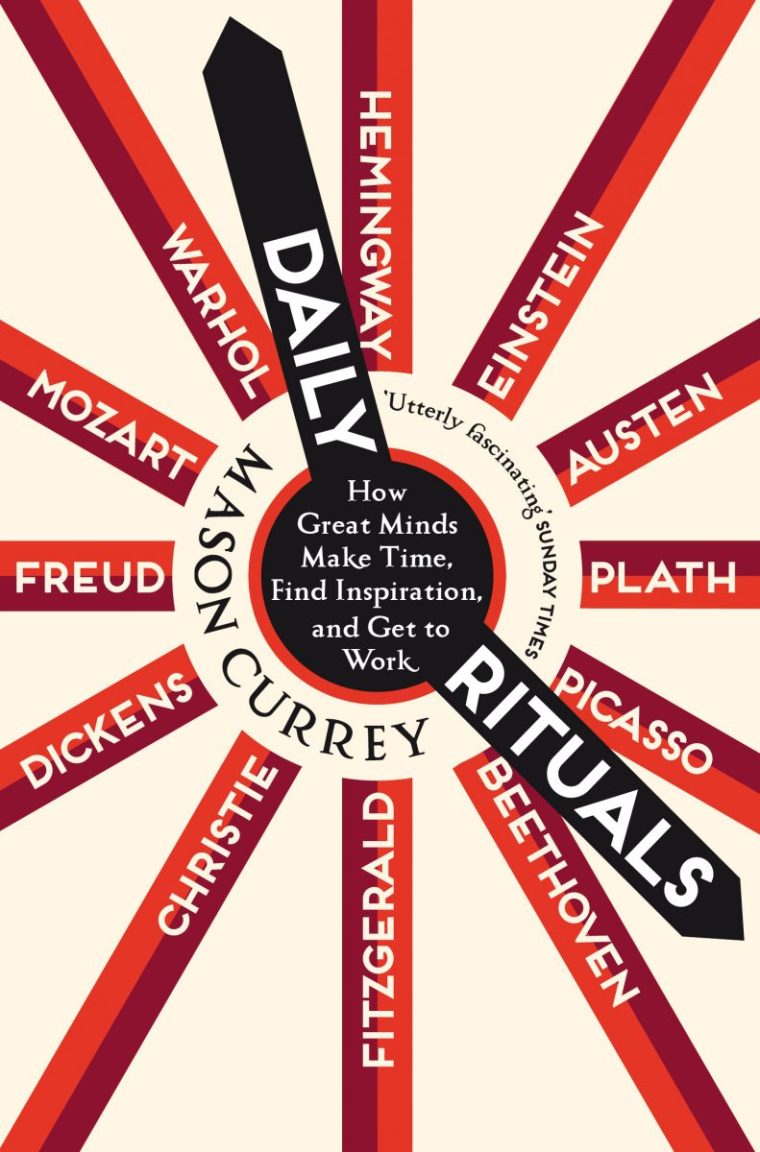 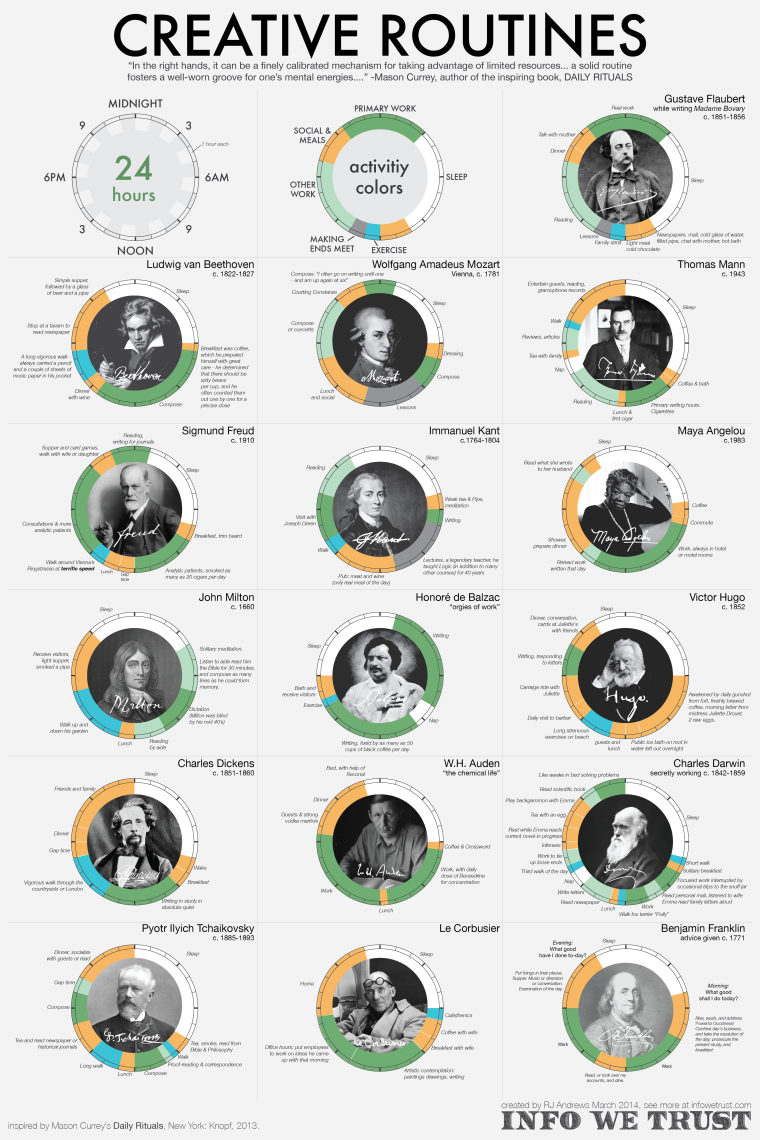 3. I keep a daily journal because Dave Brailsford told me to.

I blogged about Sir Dave recently, but the most personal piece of advice he gave me was to assess your performance every day, and make sensible goals for the future. Too many people make big life changing decisions, he told me, but hardly any of them work because they are unrealistic.

Big goals are scary, and without the right support, we don’t follow through. This is why gyms are packed in January, but you don’t have the queue for a machine in February. Instead of making big plans that sound impressive, it’s better instead to just look at something small. Just for today.

“Don’t tell yourself you’re going to make huge radical changes to your diet or plan to train like a professional athlete” Dave told me, “just do one small thing today that sets you off in that direction. Then do another small thing again tomorrow. And the day after. Don’t over think your huge diet today, just don’t eat a bar of chocolate with your next cup of tea. All the little things add up“.

I’ve mentioned John Maxwell, before, but he really is one of my favourite humans. His book Today Matters is an easy read, but a brilliant piece of writing on helping you make the most of each day. Like Brailsford, Maxwell doesn’t float the idea of making big life changing ideas. He encourages people instead to just do one small tiny thing each day. His advice is to start each day with a little mantra. Nothing major. Something that you will do just for today.

Having your own version that you remind yourself each today, doesn’t work for everyone (after all it’s not cool), but it’s not a bad way to start the day thinking what you are going to accomplish. These are Maxwell’s mantras that he has laminated on a small card and looks at every morning:

Just for Today Just for today…

I will choose and display the right attitudes.

Just for today… I will determine and act on important priorities.

Just for today… I will know and follow healthy guidelines.

Just for today… I will communicate with and care for my family.

Just for today… I will practice and develop good thinking.

Just for today…I will make and keep proper commitments.

Just for today… I will earn and properly manage finances.

Just for today… I will deepen and live out my faith.

Just for today… I will initiate and invest in solid relationships.

Just for today… I will plan for and model generosity.

Just for today… I will embrace and practice good values.

Just for today… I will seek and experience improvements.

Just for today… I will act on these decisions and practice these disciplines, and then one day… I will see the compounding results of a day lived well.

Benjamin Franklin, one of the smartest and most innovative people who ever lived, had a similar routine in the 1800’s. Just Google his life and you won’t believe how much stuff he did in his lifetime. All because he had a routine (which also was ridiculed by some at the time).

Robbins also has a “Just for today” morning ritual. Just 10 minutes. Nothing major. Everyone has 10 quiet minutes they can find somewhere. He talks about it briefly here…

5. I realised there was one song that always motivates me.

Many days I wake up I just can’t be bothered. I’m tired. I don’t want to go to school. Maybe I drunk too much the night before. Maybe I rode too far on my bike and I’m aching all over. Whatever it was, there is always one song, which motivates me. It makes me think about bigger things. It gets me excited. The words alone make me want to bounce out of bed. No, it’s probably not a cool song. Of course it’s cheesy and embarrassing to admit. But I don’t give a fuck, the words uplift my soul. And anything that does that, is a good thing in my book.

“Be students, be teachers
Be politicians, be preachers

Be believers, be leaders
Be astronauts Be champions
Be truth seekers

Be students, be teachers
Be politicians, be preachers

Be believers, be leaders
Be astronauts, be champions”.

So anyway, there you have it. A few thoughts on what motivates me to be a slightly better person today than I was yesterday.

In the past I’ve not been a massive fan of motivational quotes, mantras and self-help material, mostly because there is so much bad stuff out there. There are too many Pinterest boards and instaquotes that make me cringe. SO much crap. SO many bad quotes that motivate me. But not in good ways. They motivate me to stick pins in my eyes. But just because most of it might suck when you or I read it, there is some value in it for the person who did it. It just doesn’t all need to be shared.

Speaking of over-sharing, I’m sure most of this stuff here will mean nothing to anyone else except me, but that’s ok too.

Whether you ever admit it publicly or not, and no matter how uncool it might be, finding a daily routine that works for you (and sticking to it) could be one of the best things you ever did.